Other People's Farm Blogs Amaze me

I could just sit and read all night.  I go to another Shetland breeders' blog, probably the most recent post that's popped up on my list to the right, here--
and they have, on their blog, a list of their favorite blogs, so I click on some of theirs--
and it goes on and on.  I am charmed, I am invigorated by other people's ideas and adventures.

Here's an extremely nice piece of writing on living on the rural side:
We're Not From Around Here

Hooray!  I figured out how to make hyperlinks.  It's a new world from now on.

I'm inside this week, weaving, knitting, putting away Hanukkah decorations.  That family party is over.  Christmas with the other side of the family is next week, but I am not the host of that one.  Psheww.
It's 0 degrees F and less, here in MN, and the sheep got double feed today.  They drink a lot of water from their electric, heated buckets.  I think it's like warm tea.  Wouldn't you?
The cats, hens and ducks now all have heated pet bowls, too.  Chickens', up high on a platform so the ducks can't mess it up and a bucket on the floor for the messy ducks.  What a great idea.  It took us 5 years to figure that one out.
Posted by Gail V at 12:14 AM 9 comments:

Imagine it All White

I won't have to post a photo, then, as I haven't taken any for a while.  The snow of winter has begun, and next, the cold, so just imagine I took a photo, and it was all white.

We heard it was coming from the fearful meteorologists--so we took inventory-- milk, coffee, food in the freezer, we're okay-- hay, chicken feed, heated water pails all round, heat tape on the water hydrant-- tractor accessible to plow--we're ready.

Dear Daughter had a concert band performance on Tuesday night, projected to be the worst travel weather.  We were prepared to take a hotel room in the city in order to make the concert, but didn't have to.  The snow was blowing, by its end, but nothing extraordinary for Minnesota natives to cope with.

I tucked a flake or two of hay inside every sheep shelter-- there are 5 breeding groups of 4-7 sheep right now-- filled waters and salt boxes, got the fowl inside their barn, with cats adjacent, and waited it out.

Tonight we went out and put newly-purchased Rocky coats on two finnsheep girls-- they'd been shorn by the farm I bought them from, having been destined for the butcher.  They were spared that fate, but now they looked too vulnerable to me in their half-inch of wool covering, so we put coats on them.  As I recall, any layer will help keep a body warmer, even if it's just heavy nylon.  They are also in the most sheltering of my barns, so . . . it's as good as it gets on this little farm.  Oh, for the record, the 6 month finn ewes, who are as tall as any full grown Shetland, wore sizes D and E loosely, having no wool.  But the length along the spine, front to back, was good.   My big puffball Shetland, Bluebell, has on a G size, and it looks tight all over.
I have an H as well;  I'm thinkin': Osmo the Finn ram;  maybe Bluebell in a few weeks.
These coats may be a nice thing, but it's true that the sheep had better be quiet and good-natured to put up with being grabbed and outfitted while enjoying a bit of hay.

Finally, arrangements were made today for Shawn the Shetland ram with aberrant horns, who has the most amazing fleece I have seen on a Shetland.  Oh, I have a picture of that! 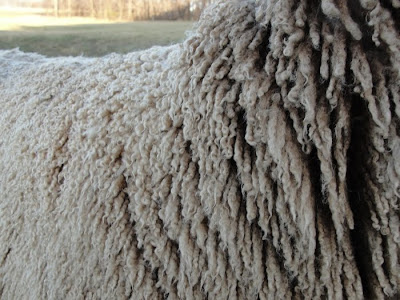 He's also seen in the last post, looking through the fence.  Half-horn guy.  Because he is now the only guy with thick, substantial horns here, I was afraid of what he'd do to other hornless rams when rams are recombined in a few weeks, after breeding.  I had a butcher date ready for him.
I called a woman who had said, "before you butcher him, call me", so I did.  Shawn can go live with her, soon, and I am always happy when an animal with great traits gets to live on . . .
Happy Wednesday, everyone.
Posted by Gail V at 12:24 AM 3 comments: