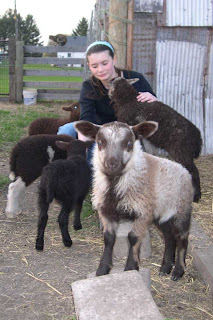 Minnesota is officially in Spring, though it's in the 50s at night-- full green and sunny, tulips up, lilacs blooming, dandelions infuriating or delighting-- depending on your mood. We've been terrifically busy for two solid weeks --we hosted a big family event. The house, the grounds, even the barns got cleaned because all the friends and relatives came out last Sunday. . . and now we can relax on Memorial Day.
Our lambs are delighting us. They're plumper and fluffier at 2-5 weeks of age, and many are more adventurous, less timid around us. They crawl under gates to go to the lamb playground, a few wooden structures they like to climb on. Then they rejoin their moms in the pasture that's knee-high in alfalfa and grass. 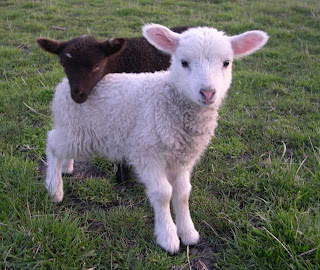 This little white ram is out of Bramble Elsie-- LRO Mullein the father. His mom is a sweet ewe, we'll watch how he develops. I'm delighted to see white lambs this year. Minwawe Lopper's unnamed moorit daughter is snuggling the boy. 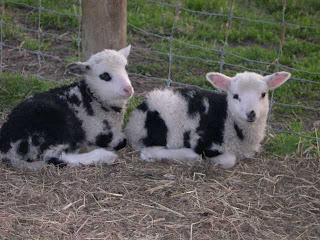 Finally, Chicklet's ram sons (gray and white flecket) got named Mike and Ike, for the candy we like so well. One is really friendly, though we turn him away. Very sweet. We're just getting to know the little lambs now, and evaluate them.

I've had a few inquiries about lambs-- we're still looking at them all. I know the two friendliest girls will stay-- maybe 3-- but there will be a few that need homes, and boy, do we have BOYS that need homes. One is a gorgeous mioget ram lamb out of Justalit'l Sarah and FirthofFifth don Telmo Bourbon. Solidly built, crimpy from head to toe, golden brown in color.
There also appears to be a LRO Mullein look-alike in the pack- cute gray nose on his black body, same little horn buds his dad had (and they are fine, now). We'll see but I bet he'll be another great fleece and conformation builder for a flock. A moorit flecket or HST-- his picture was shown weeks back-- Abbot.

Last lambs of 08 before Shepherd's Harvest 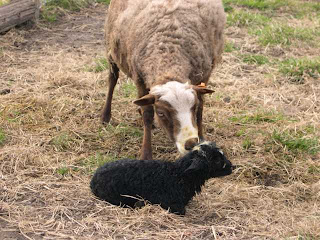 I think we are done. Minwawe Lopper delivered two ewe lambs last Monday morning, Cinco de Mayo, a black one and a brown one, white tracery around the head-- No spots, darn! They are out of LROak Mullein, the new fleece king. So we will see how these little girls look later. These two ewes made it, I think, 14 rams to 8 ewe lambs out of 12 bred ewes. 5 ewes didn't take--! I was surprised that NONE of the girls I left with Mr. Big Horns and Great Spots, LRO Alex, got bred. I don't doubt his sperm count, but it showed me that those little rams can get no respect (or anything else) from the ewes. He was small-- as a lot of breeders like them-- and I saw this 2 winters ago, when Minwawe Silver could not get a girl to take him seriously, but they sure did the following winter, when he had more size to him.
I didn't mind having open ewes-- I don't need that many lambs-- but I did want to see Alex's offspring. So that will have to wait.
Happy to be done lambing, though.
I spent the day at the wonderful Shepherd's Harvest in Lake Elmo, hawking fleece and roving to a crowd who really wants it. That was very successful, so my storage space will free up, here. The company there was great, and the other exhibitors have truly beautiful yarns and other products.
I'm going back tomorrow. Happy Mother's Day to those who will be busy celebrating that!
Posted by Gail V at 10:45 PM 3 comments: 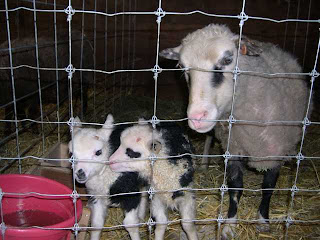 So here is Minwawe Chicklet, a grey flecket ewe, and her two new fine sons, either black flecket or gray, like mom-- too early to tell yet. They may both be gray-- but we'll see.
Chicklet's the one who tried to mother up Elsie's newborns, until she inexplicably produced two of her own to take care of, and then felt all better. One of her rams had a "leg back" at the shoulder (for non-shepherds, that means NOT the normal birth position of chin and nose resting atop toes of two front feet; here, one leg is forward, one back along the body). This was the second time I experienced this type of birth, the first being only 10 days ago. The books say: push the baby back inside, bring the 2nd leg forward, pull the legs out front together. I say, you expect me to get my hand next to that baby in that tight passageway? I just pulled the one leg and head together, and baby boy slipped right out, leg back and all.
But maybe that only works well when the ewe's already enlarged by the first delivery.
Anyway, I think I'm learning. 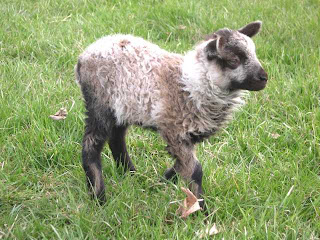 Second picture: little katmoget baby May, out in the grass with the big sheep. Pretty darned cute. Her mama tells her to keep away from us, although her mama loves us.
I don't understand.
Posted by Gail V at 11:59 AM 4 comments:

Baby bonanza in the barn 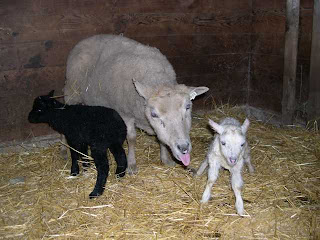 7am Sunday.
Bramble Elsie says, "My God, that was EXHAUSTING! They don't call it LABOR for nuttin'! I'm working on delivering my second baby and some crazy spotted ewe comes and starts claiming my firstborn like it was hers! An' I'm, like, incapacitated, lying there, trying to get No. 2 ram-baby into the world, and Other-ewe, Mom-zilla, is licking off my son, talking to him, telling him she's his mama! It's enough to drive a girl INSANE!"

(The shepherds found this whole affair rather difficult, as well. These two ram lambs are out of Elsie [NOT CHICKLET!-- who produced flecket ram lambs 2 hours later!] and Little Red Oak Mullein-- and are solid gray and white ram lambs.)

Darn! No offense to the male gender out there, but we just don't need so many guys in the flock! Chicklet's two made it 14 ram lambs vs. 6 ewe lambs. Oy. 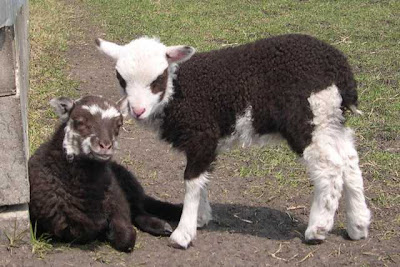 And Little Red Oak Abby and Equator's son, hmmm. . . Abbot?-- may change that name. An extremely friendly boy (Dad Equator is-- Abby is NOT). Having encouraged him to like people, I now have to turn aside when I see him, so I don't have a ram who butts for attention! 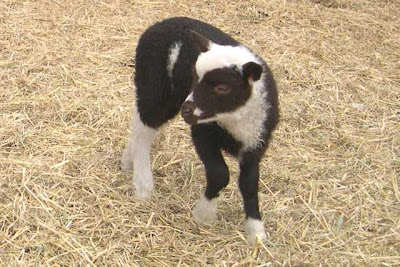 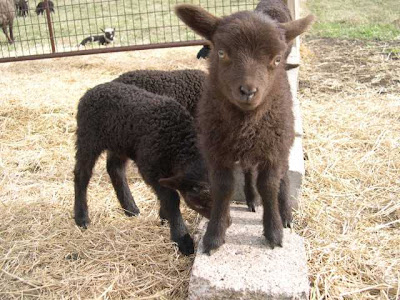 Not a very fine photo of our newest, little Katmoget LRO May, out of Minwawe November (a fawn katmoget) and Equator. She could've been spotted and Kat, but I think just Kat-- what do you think? All those color changes on one fleece! 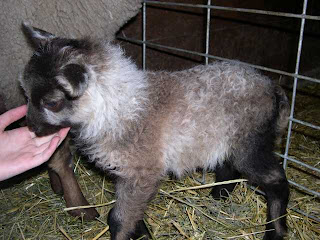 Finally, what to do with all these new lambs? Sit and pet them, of course! 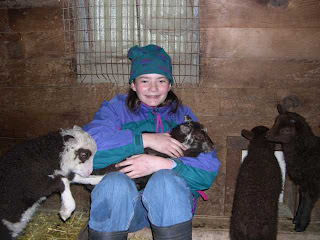 No babies for a week, now a Katmoget!

We had our first little katmoget ewe lamb, Little Red Oak May, out of Minwawe November. Just born today, mother and daughter are doing great. Photos of a DRY baby tomorrow!

Here, too, is a photo of Bluebell's babies born a week ago-- the ones who've given me a great scare twice so far-- 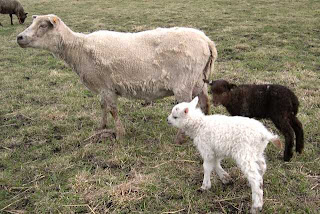 I still don't know if they had a selenium deficiency or something like "navel ill"-- a systemic bacterial infection--
but I've been catching and giving .25 cc shots to these little ones all week. Selenium, twice, antibiotic, twice. I've been talking to vets by phone--
They seem quite a bit better.
Bluebell's ewe lamb is really exquisite-- her fleece has the velour look that her big brother, Mullein's did, and I was right about him-- it was great when sheared.
Her color is the modified, mioget or fawn of her dad, FirthofFifth Don Telmo Bourbon-- but she is Ag and will fade to musket. She also has spotting around her head, behind the ears, here and there. She'll throw some lovely lambs and produce a lovely fleece.
Jimson is Bluebell's white ram-- he was the sickest of these two. Right now he has loose white curls-- so what his fleece will be like when mature, I don't know, but will wait eagerly to see. I'm so happy to have a white lamb, it's my first!

Now today, November's katmoget girl. She's only thrown solid lambs before, and singles each time-- but she is small. Maybe Nature limits the number of lambs if the ewes are smaller.

The past two days were spent gardening, ahead of the storm that is now thrashing about outside. Yesterday, we moved about 40 strawberry plants that had been planted by birds in my perennial flower beds and made a little patch-- fenced the chickens out of it and congratulated ourselves on a fine job!

Today, we moved about 30 orange daylilies to a long line along our 40' pole shed. We also dug two small ash trees up and put them in one of the ewes' pastures, with guards around them against the sheep. We're hoping they'll "take" well at this time of year, and give shade, someday, to the animals.
Posted by Gail V at 11:33 PM No comments: