We did it again; asked a broody hen to set duck eggs.
We got too impatient, though, and ended up with only one duckling. (After a month of setting on that nest? Poor hen!)
But she loves her duck.
Takes him outside in view of his relatives (could be his real mom in the background!) 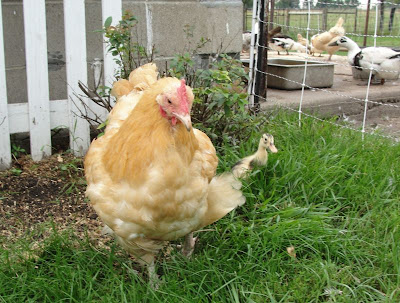 She teaches him to dig for yummy dirt, bugs, whatever it is they like in there: 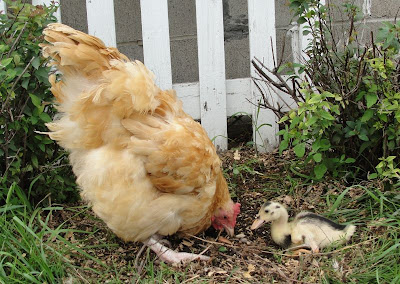 And takes him back to the barn. 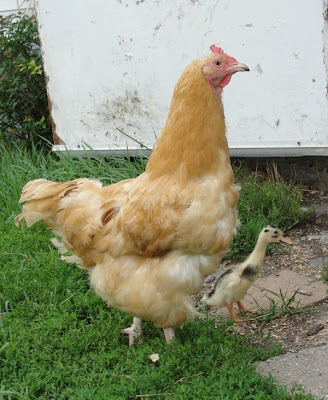 Okay, I said I had a few to sell! So I had to get some pictures on here, right? 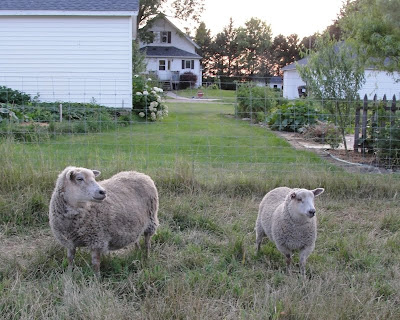 My grand old favorite, Highland Hollows Bluebell, lounges with her daughter, LittleRedOak (LRO) Ivy; my lovely country home and gardens providing the backdrop. Ivy looks just like her mama, I think. Bluebell is the ewe famous for triple-thick, lustrous, crimpy wool-- her best trait, besides her pleasant demeanor. Ivy's dad is Kimberwood Leonardo, a smooth polled moorit ram. I think (for you sheep geneticists) Ivy is likely a black ewe in white pattern (!); I just learned her mom is. Ivy had a quarter-sized black spot in two places when younger. Both girls can throw brown babies, though; Ivy is AaAwtB?Bb, and I think Bluebell actually carries spots, too; she's had a smirslet daughter-- so Ivy could get that.

I'd keep Ivy because I love all that comes out of Bluebell, but that's the problem; I already have so many out of her. Besides, Ivy doesn't like us yet!

Not to be rude, but here's Ivy's posterior. A slightly longish tail, just like Mom's. And the same crimpy, thick wool Bluebell has, too! 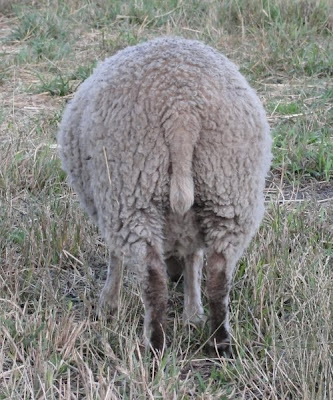 Next, LRO Splash, one of LRO Catnip's twins. Catnip is the spotted-udder ewe seen on the last blog entry, and on several others in months past. Catnip is a loudly splashed moorit & white ewe, friendly as a labrador retriever. So are her daughters, Splash and Smudge. Splash had a white splash on her head at birth, Smudge had, you know, smudges of white instead. Their dad was also Kimberwood Leonardo, whose solid moorit largely won the pattern war in these lambs.
Splash, then, is a Bluebell great-granddaughter who is half-spotted and half-polled, if you want more of those traits in your flock. 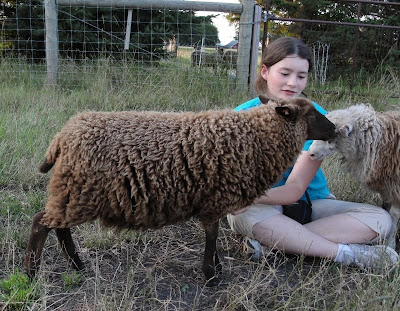 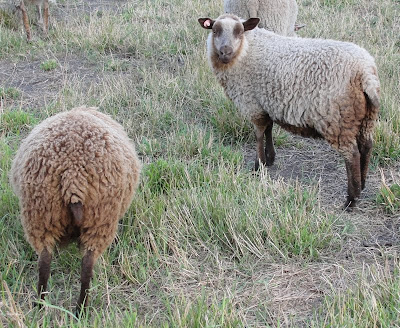 January is my shy, fawn katmoget-patterned lamb. She's out of Minwawe November, a kat, and Kimberwood Leonardo, again! January's twin brother is a smooth-polled ram-boy who will be breeding for me here, this year.

Here she is, laughing as she evades my camera: 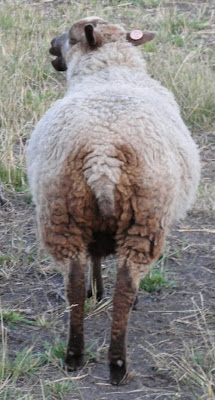 Prices for these lambs varies; unregistered, they can go for $125; registered, $200. If you wanted me to bring a lamb or two to the Jefferson, WI Sheep and Wool festival next month, I could.
I will charge less for groups of 3-- and I have a lot of handsome little rams for sale! I'll post again soon.
Email if you are interested: gvonbargen at aol dot com.
Posted by Gail V at 2:18 AM 7 comments:

I forgot to mention my great surprise when Garrett Ramsay, Perham, MN Shetland (and other species) breeder, strolled into the Carver County 4H sheep barn as we were setting up Lily and Poppy's stall. He told me he was at our little fair to judge the pigeons! 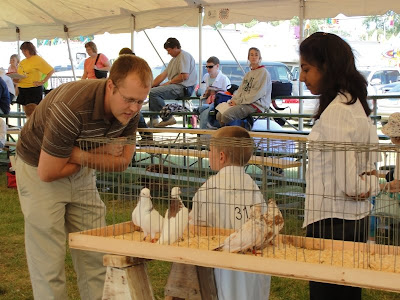 I hope I did not distract him too greatly while I snapped a half-dozen pictures. (If you want more of them, Garrett, email me!)
Duck showing followed pigeons; they are such inherently funny creatures, I had to photograph a few. Sweet children, intensely awaiting the judge's scrutiny: 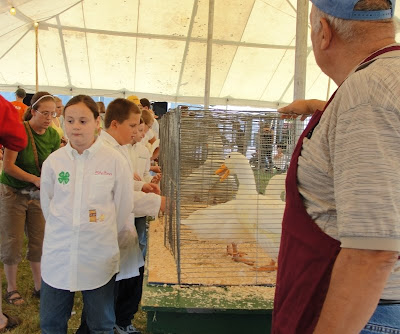 And this little girl, not interested in showing, but in taking home this duck she bought from a big 4H girl! Adorable! 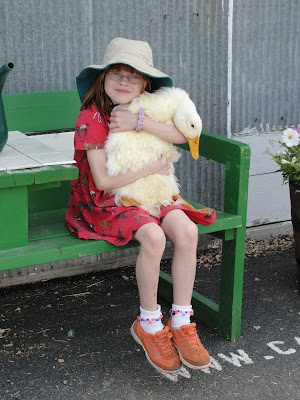 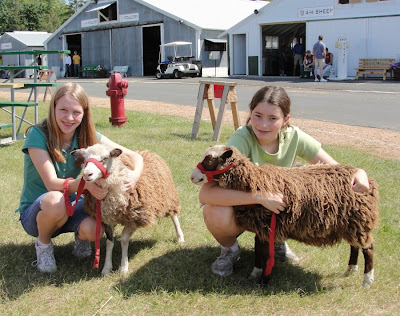 Little Red Oak Poppy (left)and LRO Easter Lily went to the fair this week! Emily (right) asked her friend, Samantha, to help her show one of the lambs, and having her friend there doubled the fun.
The lambs took home minor ribbons in the "any other purebred" class; the fleeces won big time.
More pictures and stories to follow.
Posted by Gail V at 12:23 AM 3 comments:

We've sold a lot of sheep in the past week-- Ten! A year ago I sold off the sheep who never liked us, so selling any of our remaining sheep brings twinges of regret-- even when it's for all the right reasons. Like, that we can't support 50 sheep here! Or, that we don't want horns in our flock anymore-- or too many offspring from a certain ewe.
So sadly, we sold 5 old friends and 5 spring lambs. 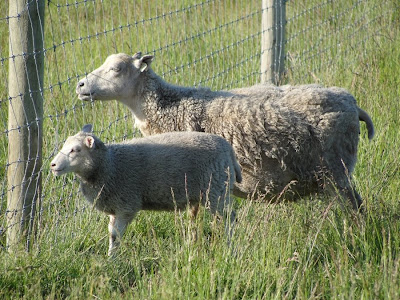 Here's old Bramble Elsie, the big white ewe who ran to you, smiling, if you sat or kneeled down. Elsie and her friends, Bramble Bess, Minwawe Chicklet and my own Little Red Oak Mullein went to Rochester, MN to live with a kindly older shepherd. Elsie's little ewe lamb, Elise, is staying here. Her other lamb, Lizzie, is living 5 miles south of here, with a wonderful young family new to this area.
My friend, LRO April, the first friendly lamb born here, went, along with Minwawe PandaBear's ewe lamb, to live with Stephanie and her charming daughter Colleen in Hammond, WI.
I hope they are all happy in their new homes, although all the people who bought sheep clearly loved them as much as we do.
On a funnier note, I have wanted to post this June photo of the ewes n lambs in the morning-- Maple is peering out of the barn, Catnip, her brown lamb and another are nearby. What I love is (click on the picture to biggify it)Catnip's brown and pink polka dotted udder! So funny! 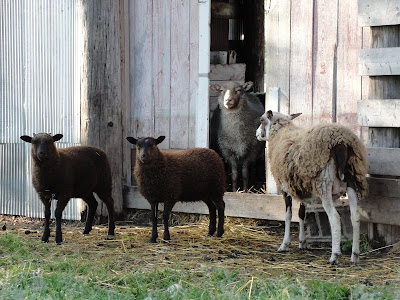