I told you my polled ram, Little Red Oak Ash, came back here after living at Sabrina's a while, and Becky's a shorter while. Here he is, in his bulked-up, bareheaded glory: 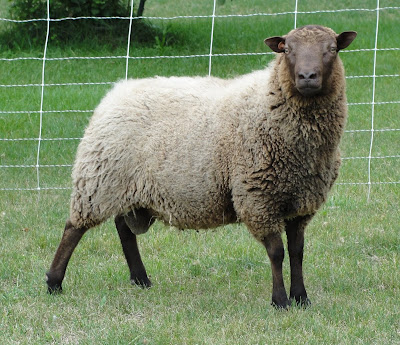 And this is his uncle, though a year younger, LRO Forrest. Forrest is out of HHW Bluebell and Kimberwood Leonardo. He produced a pair of beautiful twins this year, but he is for sale. Too many rams live here now! He's musket (oatmeal color), with fleece samples and a photo of his offspring available upon request. 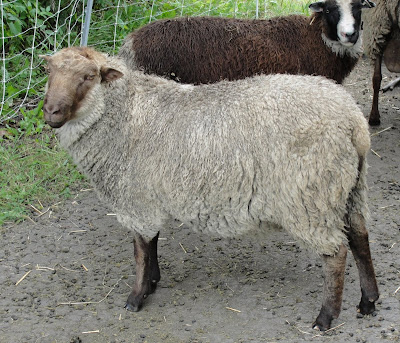 I caught the ewes resting in the shade, all together. Then they saw ME and came running! 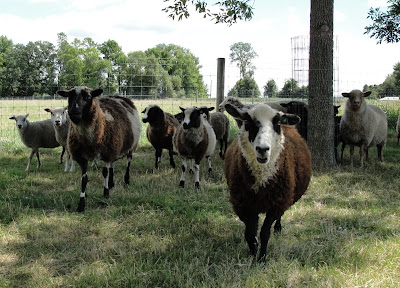 Of finn ram lambs, I have two black ones. Both have a brown dad, so carry brown. This one is from my white ewe, Mari. His tag is no. 114. Good looking boy. (both finn rams are now SOLD) 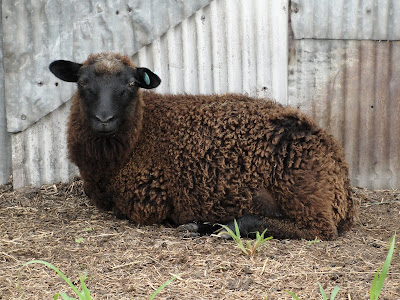 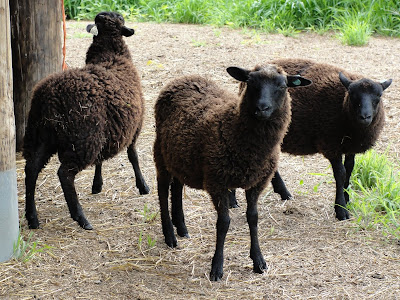 Looking quite the same, but a few weeks older and several inches bigger, this ram lamb is from my cow-spotted Finn ewe, Kora. 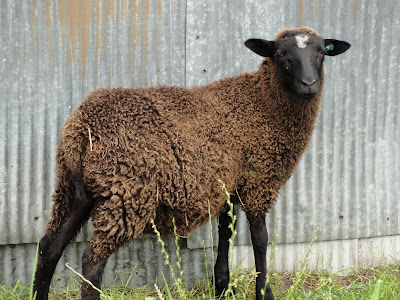 I'm publishing these pics for TaraLyn in WI, who bought Shetlands from me a few years ago.

I'll get photos of some of our ewe lambs next. I have Finns in brown and black; Shetlands in black and gray gulmoget, a gul-kat, a white, brown oh, many more. All colors. We are now getting the number of lambs down so that our pastures are greening up, and happy to have fewer to tend to.
Happy End of Summer, everyone!
Posted by Gail V at 11:22 PM 1 comment:

Emily and I made up breeding pens and lists of must-keep and oughta-sell sheep this week.
We very sadly decided to sell Highland Hollows Bluebell, our older, first favorite ewe. It was a few years ago, when Kim of Kimberwood Shetlands noted: "If you want to breed for polled rams, getting rid of your ewes with horned genetics [will be necessary]".
I remember gasping. We love some of our older ewes.
Nevertheless, I have been selling 2 or so each year to other breeders. None have had to go to, well, you know.
Bluebell and Minwawe November may be the last of the older girls (born 2005) who are left. There are a few who may have horned genetics, but I think all remaining ewes have a polled gene.
We also decided that since LittleRedOak Ash (out of Maple, Bluebell's daughter) is coming back to Little Red Oak, we need fewer polled rams.
We will therefore sell LRO Forrest, Bluebell's 2010 son. He is musket, pretty full of himself but also, friendly.

This is a lamb photo of Forrest, taken last summer. 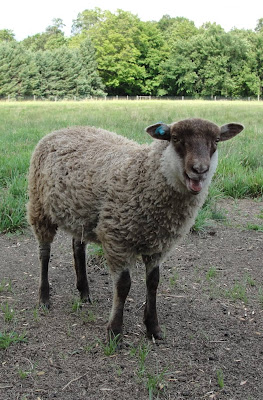 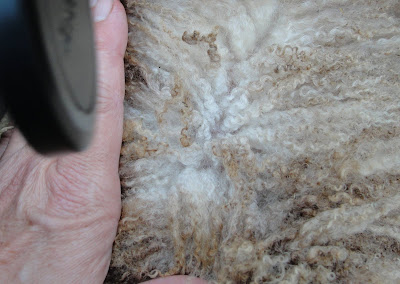 Newer pictures of him appear in last April or May's post-- of all the rams? But he was a thinner lad then. He has muscled up now.
More pictures, soon.
I can hardly bear to say goodbye to Bluebell...
Posted by Gail V at 2:23 PM 3 comments: