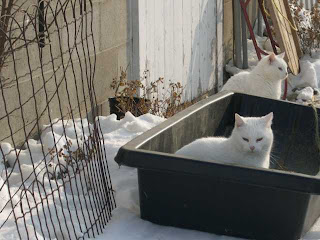 Happy New Year!
I'd better post a snowy scene, quick, before it all melts next week! We have had the usual Minnesota -10 to +28 degree weather since the first snows came in early December, so it's stayed on the ground all month. Now they tell us we will have temps above freezing for 4-5 days, so this should be interesting.
Before it's gone, here's a snowy scene of my two old farm cats, Frances and Jake. They "came with" the farm when we bought it 4 years ago. This is the only season in which their natural camouflage coloring works, so I had to catch them sunning in front of their barn. Frances is in the wonderful black plastic sled made for hauling hay bales, and Jake poses modestly in front of the old runner sled now made obsolete by the plastic sled. (Shepherd's tip: the black sled also worked really well as a hay manger-- until it was needed to tackle the deep snow. Same manufacturer as those round plastic calf huts we all like as little sheep shelters.)

Now, secondly, someone once wanted to see a picture of Bourbon (Firth of Fifth Don Telmo Bourbon), a very pretty, mioget? fawn? caramel-colored ram that Garrett Ramsay so generously let me buy last summer. I did catch a nice picture of him with Minwawe Equator last November-- these two senior rams together, just before they were sent into breeding pens with the girls. So here is that photo. Bourbon's on the right. He's going to need a new home or, ahem, another situation soon. I can't wait to see his caramelly offspring in April, but I never want to put him near a building I value again. Of course, maybe some advance planning will take care of that. 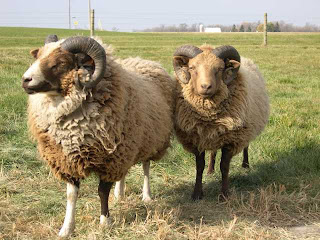 Have a great New Year! I am happy to be through the holidays, fun as they were, and on into spinning & weaving season!
Posted by Gail V at 12:34 AM 6 comments: