Ahhh, Christmas is done, celebrated, gifts exchanged, goodies made, and we still get to have pumpkin bread for breakfast every morning.  We decrease the sugar in the pumpkin bread recipe and then make up for it by drinking egg nog, mmmm.
I like this story in pictures:   How the finns looked after the first blizzard, holed up out in the pasture shed-- refusing to come out -- 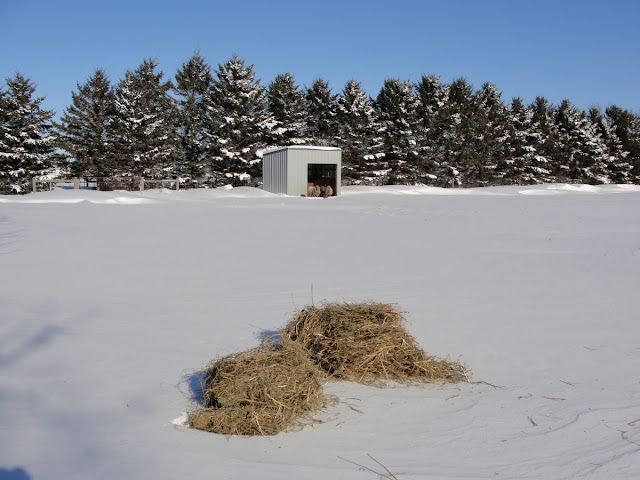 until Emily blazed them a trail by walking back and forth to the hay we'd set out: 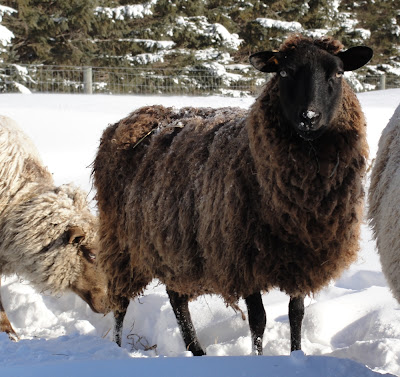 Kimi
We love these silly girls.
Last week's sheep episode was about Aspen, the little polled musket ram whose amorous endeavors got him caught by one foot in a gate-- and it ended badly for him, I'm afraid.  My biggest concern was that the leg would have been frostbitten, with a slow and torturous end.  The vet, by phone, advised sending him to the butcher-- my Shetlands don't make big money, he was a polled ram lamb-- prized by some as rather rare, yet, but not by enough buyers that I would make the mortgage on him-- so diagnosing his injury was not worth paying a vet fee.  So, he will make my daughter's favorite-- lamburger.  His trip to the butcher was very quiet, very easy on him, too-- bedded down in a straw filled dog crate and left that way until the end.
We had his parents in a breeding group again this year, so we hope for another polled brother of Aspen's.  That's the way it goes.
At Christmas, my brother mentioned bad weather coming again next weekend-- so we broke up sheep breeding groups yesterday rather than wait a week.  Our choice is often Christmas weekend, since we have everone home to help herd animals here and there.   This year, more than half the work was shoveling a ton of snow so that 16' gates would  swing open (did you get a visual on that?) when sheep left an area-- and 2' wide paths for them to get from one barn to another as we shuffled them around.  Our barns are about 100 feet apart.   The snow is about 3' deep everywhere-- the sheep were in chasms as high as their backs, trotting down the alleys between our barns as we directed them.  All went well.
Today, frost has covered the trees and it is drifting down, sparkling like glitter in the sunshine.
Happy New Year to everyone.
Posted by Gail V at 11:32 AM 7 comments: 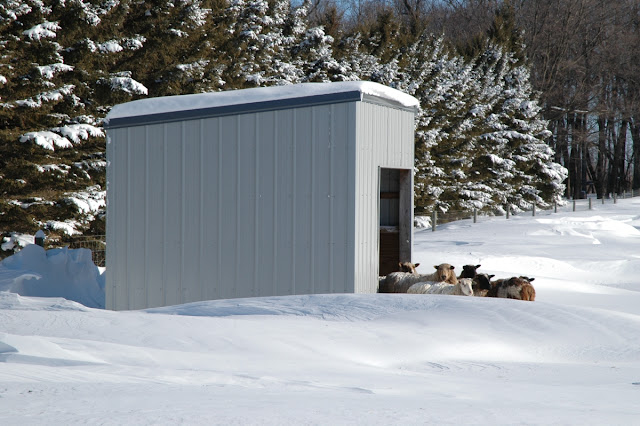 You know we've gotten a few feet of snow in Minnesota, so far this fall/winter-- nearly two feet of it last week. Another six inches yesterday.  I am tired of shoveling now. 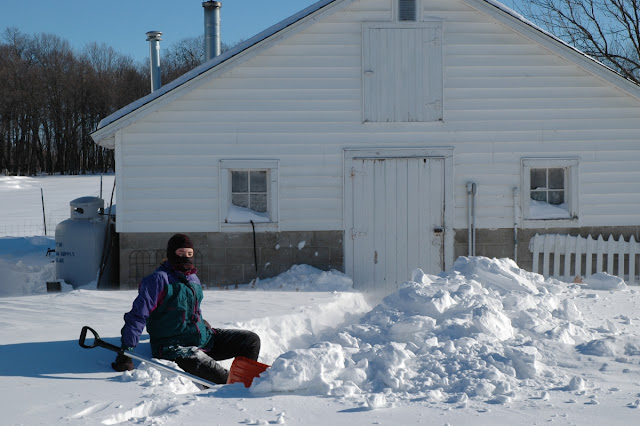 We made excellent, two-foot wide paths from building to pump house to hay barn to sheep fence, so that we could pull the beloved black hay sled from one feeding site to the next.  Several five-gallon water pails fit in it;  two bales of hay, stacked, also fit. So I haul the sled out with water in it, and bring it back with a bale or two, every day.
Yesterday I waited until late in the afternoon to do chores, and when I got to the far barns, I noticed a curious absence of a certain young ram lamb, LittleRedOak Aspen. A busy guy, he's usually right at the gate when I come near, looking for hay.  He and a little Finn roommate have been bunking in a small corral next to the old lean-to, which has the "maidens" in it-- ewe lambs we aren't breeding this year.  It frightened me to think that he might've done what we had decided he couldn't-- used a new, 4' snow drift to leap the fence into that pen of attractive maidens... but I found the ewe lambs blinking, alone, unaccosted.
I went around the back side of the ewes' shed and, yee gods!, found Aspen dangling from the gate, one leg hooked in its  metal mesh.  He'd been there awhile, judging by the snow on his coat (the snow had stopped falling hours earlier) and other signs.  Thankfully, his front feet were planted on snow on the this side of the fence.
Am I awful?  I worried a great deal about his pinned leg-- could the circulation have been cut off so long it was frostbitten?  Will I have to put him down?
But what I also thought was, "I'm glad he didn't breed those girls".

I'll head out there now to see how he's getting around.
Posted by Gail V at 9:48 AM 6 comments: