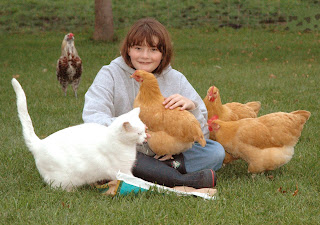 This picture makes ME crow!
Farm girl Emily loves these 3 Buff Orpington chickens, while an americauna rooster looks on; Jake the cat will pounce on any seated human to seek snuggles.
Posted by Gail V at 1:24 AM 4 comments: 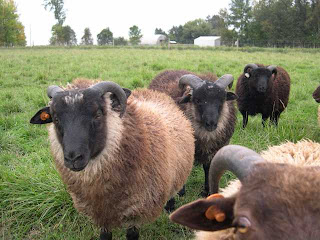 Camera in hand, I crept out through the horse's pasture and looked through the fence for the pack of ramlings who live the furthest away from the house. They came running! I studied tails and horns and looked for straight backs and legs; they're all still developing, getting big, and breeding season isn't too far away, now!
The twins of Bluebell's, Mullein and Cohosh, two shades of gray ram, two types of horn, were acting far less timid than they'd been as youngsters.
Everyone's grown a lot; two who have damaged horns are growing new bits, though one is for naught, he's a cull animal due to a fuzzy tail. The other is Mullein, one of the Bluebell twins; his broken horn tip has made the horn curl in a way that looks dangerous to him in future months. That will be a wait-and-see situation; I still wonder if his horns are "aberrant", as the polled shetland breeders call it; light and weak horns--these sure break easily,
However, I want one of these gray twins for breeding, and he's winning, because his tail is better than brother's.
His gray is so much lighter than his twin's that he has a a faint (sunbleached) brown glow on his superthick wool. 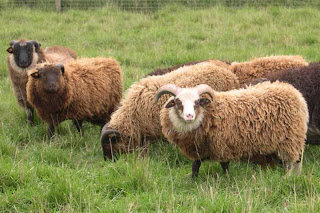 The other guy of the hour is Alex, with his Court Jester horns-- man, are they HUGE. And he seems to be a little guy compared to the others. I had to wonder just how many calories went into producing those mastodon-tusk horns! He's a musket spottie, pretty good tail, and he may be all I have left in the flock of Minwawe Silver's blood (his dad), so he gets some girls this year.
Peeps says the ewes like big horns, so they should go for this guy!

I got my first two tanned sheepskins back from Bucks Co. Fur Products this week. That was a pretty expensive endeavor (about $55 each including shipping both ways), so it remains to be seen whether it's worth doing to future hides. They are very pretty, though--- I left 'em with my sister to hawk at her crafters' retreat this weekend, so I can't post any photos. One is moorit, the other is black iset, noticeably coarser-- but so many people just ooh and ahh over that silvering on the black, my daughter thinks people will favor that one anyway! 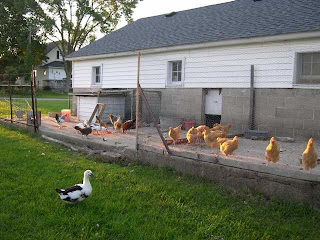 Also this week, I sold 15 young chickens, which is great, since that is exactly how many new chicks my broody hens surprised me with this summer. The people buying them were hobby farmers -- two different farmers-- who were just so nice it made the work of selling/meeting/rounding up critters fun. Now I need to sell my horse. I decided I have to find a quieter, more experienced horse, since her rider is not. And I thought I'd be happy to skip feeding one all winter, and will wait till next spring to shop for one. That could change, though, if someone came along with the right beginner's horse at a good price (A SHORT horse, please!) We've liked Bell and she is gorgeous, but she needs a better rider than my 12-year-old, and what the heck! I'd like a quieter ride myself.

Fall is here officially on Sunday. The passing of summer usually makes me very sad, but I must say that since I started fooling around with fiber arts in the cold months, I look forward to that kind of recreation ALMOST as much as the outdoor activiities of summer.
Let the spinning begin!
Posted by Gail V at 11:09 PM 4 comments:

But we just got back from the Jefferson, Wisconsin Sheep and Wool Festival, a good feature of September! I rode in a van with 4 sheep and spinning ladies from MN across the WI landscape just to spend 2 days talking, looking at and listening about all things sheep and wool. Great fun! Of course I forgot to get a picture of all of us.
Later on. . . 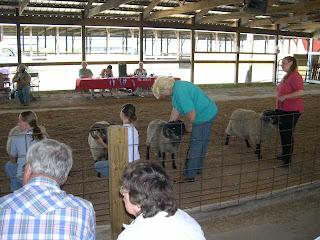 Here's a picture of Peeps in the ring, showing a ram. It's hard to shoot in that darker arena with backlighting, but there it is. It was great to see her, as well as Jane Eager of Highland Hollows and other breeders who live far from me. Kate Goebel is also showing, and I'm afraid I don't know the young girls on the left. We didn't stay too long to watch the judging, but I really enjoyed the judge's remarks. He also judged the fleeces, a learning experience for me to watch. 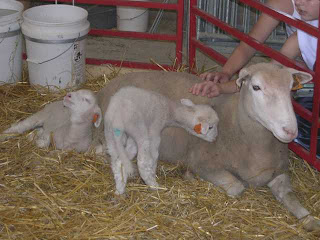 Also seen were some adorable lambs, with long tails still on 'em, sleeping by their mom.


Further appreciated, this dad and son combo in one of the many sale booths I browsed. Aren't they so cute? 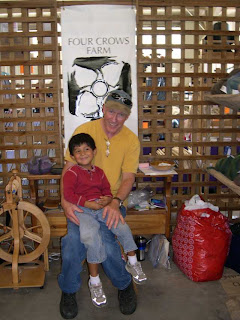 I loved talking to the vendors the most, today. I bought a crook from Nancy Barnard, greeted Letty Klein and Ann Brown,The Shepherd's Rug authors, Julie G. of Bramble Wool Shetlands, and finally, talked Finnsheep with the Wee Croft shepherd. Angie, our spinner friend, says they're verrry nice to spin. 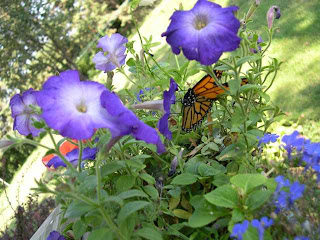 Finally, three Monarchs hatched out of their cocoons and took flight this week.
Posted by Gail V at 2:47 AM No comments: